Sum up the Youth Exchange!

Do you want to see our methods and activities implemented during this youth exchange?

Check out the official video!

Let's see what the participants think about this project:
- Alessandro (Italy) 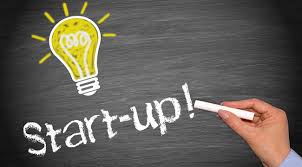 Check out their feedback!

We make decisions everyday - some of them are important, some others not really. That October morning, I had no idea that the decision I make will get me for over a week to the Romanian seaside city, through Rome, Bucharest and Budapest.

While I was scrolling through Facebook I saw a post about a youth exchange in Romania. I didn’t pay much attention to it and moved on with my daily routine - at least till the moment when I met up with my very best friend Ania that has seen the Romanian exchange post as well.
“So, maybe we could do this”?
“Well, we don’t have plans for November anyway…”

And just half an hour later we were applying for our “little Erasmus” as we used to call this exchange. In the next weeks we found out that a group of six is going to represent Poland. The group consisted of two more of our friends, we bought the tickets, made to-do lists for every city we were about to visit and planning everything before going on the trip. And when the four of us landed in Bucharest after two sleepless nights, a night of sightseeing Rome and some issues with my luggage being too big while the size of it was actually ok, we knew in four hours we are going to start the proper-educational part of our exchange, do quite a lot of activities on start-ups that scared us a bit because of their professional sounding names - at least that is what we saw in the schedule. But as soon as we got in the bus that was going to take us to Eforie Nord we all fell asleep (some of us were even snoring which really annoyed the driver - but don’t worry Artem, you didn’t disturb our sleep).

Later that evening when all of the participants from other five countries arrived we were sitting in an “exercise room” and I looked at them as a bunch of strangers, wondering what am I doing on this project, if my English is good enough to be able to debate and work on a social entrepreneurship topic with others. As I found out our whole group consisted of 30 people from different countries, cultures and backgrounds but sharing similar fears in this very moment. In the next few days we had some integration games and team building exercises.

We have been on two trips where we had a chance to see a real social enterprise and hear a story of how it was built from the scratch, we could learn more about Romanian history in ethnic museum in Constanta. During “culture” nights I had a chance to find out more about home countries of the participants. I know how it may sound - you imagine now that I saw a few presentations and now I’ll proudly say that I know something about the Turkish, Bulgarian or Romanian traditions. The truth is that during these nights I learnt how to talk with Italians just using gestures, I took a part in Spanish corrida or what’s more important the polish team could show other people that our culture does not consist of drinking vodka (however, it’s a big part of it). I was also lucky enough to celebrate my birthday during this Erasmus adventure. While I was expecting to hear “happy birthday” song that day, there was much more waiting for me. First, right after midnight, when I was already in bed, watching some videos on youtube, half-awake, Ania and the rest of the polish team had a surprise for me – they knocked on my door and when I opened them I saw all the participants holding balloons, singing and having a “birthday bread” for me.
Later that day I had so many birthday group hugs, heard so many wishes that I stopped to even count them. And when I thought that nothing else is going to happen – boom! and I was in the middle of a circle made of everyone singing (again) and I got a real birthday cake this time. All these events left me speechless so many times that I was scared I’d lose my voice forever.

During the last days we worked on our social businesses. Well, if anyone ever told me I’d be enjoying writing a business plan for a rehab facility that is a farm at the same time I wouldn’t believe them! But here I was - loving calculating the price of the bio cow, etc. What we didn’t know back at that first evening was that we were all going to stand in the same room in ten days not as group made of 30 random participants of one of the Erasmus+ projects but as a friends, as open-minded people that share the same interests and hobbies (not fears anymore), taking part not in one of the projects but being a part in the START-UP MACHINE project. What happened? I like to believe it was magic of Erasmus.

When I got off the plane in Warsaw, Poland I knew nothing was going to be the same any more. It’s already been more than a month since I did it and I still can’t get over the feeling that Ania is going to wake me up saying that I’ll be late and I’ll have to do “spanishment”, I’ll eat ciorba watching Romanian music videos at my polish-bulgarian table, I’ll hear “allora”, someone will say “hola Ola” thinking it’s a brilliant joke, the member of the Spanish team will ask “ok?”, our facilitator will say “beautiful” when he sees something he doesn’t like or I’ll chill in my room with all of the members of the polish team. But I won’t. And that’s the only sad thing in this little Erasmus of mine. 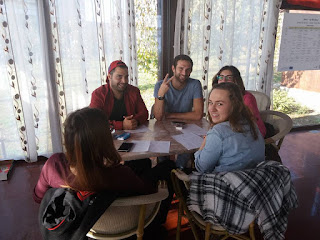 After doing a lot of work for their social enterprises, but enjoying at the same time the whole process, the participants had to prepare the final business plans and "to apply" for financing.

Firstly, the facilitators gave them information and hints about how to present the final business plans. They read it carefully and then, respecting the given deadline, they put the pieces of the puzzle all together (elements of identity, advertising plan, the marketing and budget planning parts and all the other necessary elements).
In the end, they submit the final business plans to an e-mail address; this was the first thing to do in order to enter the competition for getting financed.

After working enthusiastically for their social enterprises, they got one last challenge: to convince the "investors" that their ideas are worthy of their attention. Every team had 5 minutes to present their business idea and then they answered the questions that the “investors” had.
All the teams did a really great job and they payed attention to details, that made the competition even more keen, so finally, all the business plans were financed.

*Below you can check all the business plans developed during the project:
- CeraWorld
- Rainbow Caffe
- Re-plastic
- Fattoria di Vita
- Refood
- Unitrade. 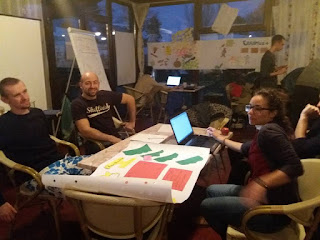 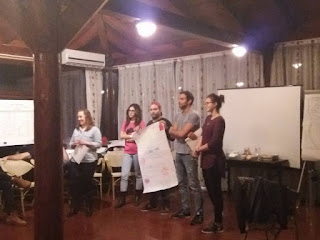 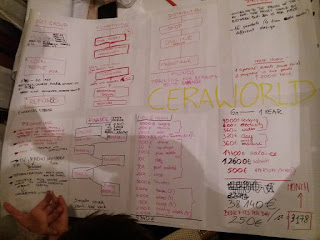 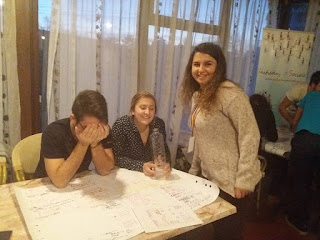 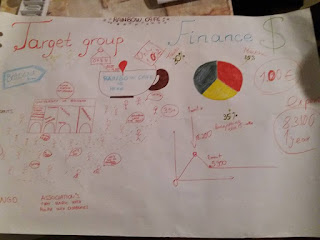 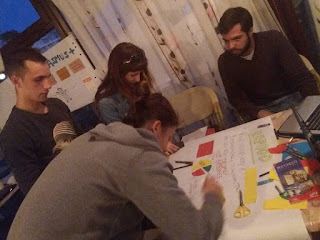 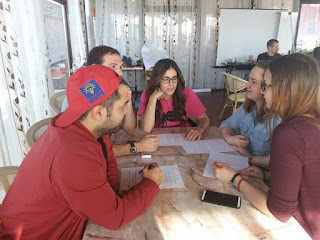 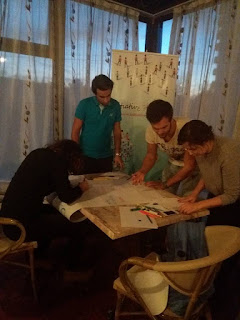 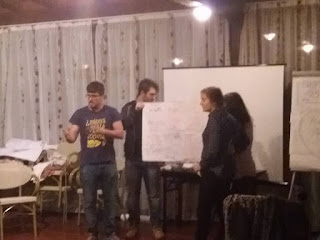 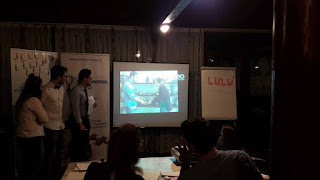 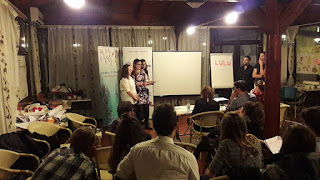 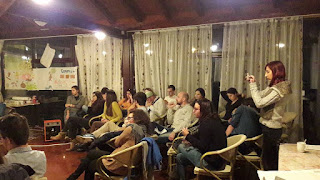 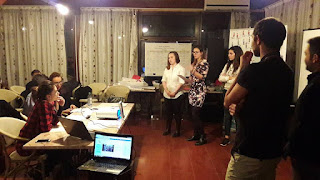 Description: For this activities, the participants were divided into multinational teams and they had to discuss, debate and choose the following: 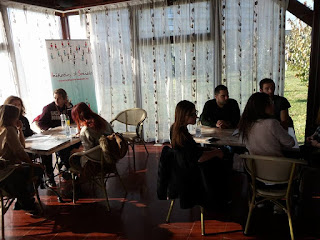 They discussed and then they decided what each of them should do, based on the professional qualities of each member of the team.
Firstly, the participants created a Facebook page of the social enterprise and did all the necessary settings.
Outcome: Rainbow Cafe, Re-Plastic, Refood, CeraWorld, Unitrade, Fattoria di Vita. 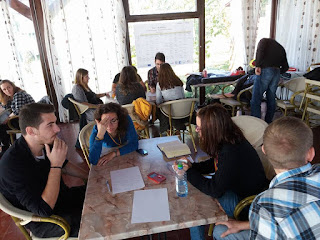 Study visit into a social enterprise

Beside all the activities implemented through non-formal education, we also had a study visit into a real social entreprise from the region.
Here, the participants had the opportunity to find out the "story" of this social enterprise (how and why it was established, how they did the business plan, how they found the financing) and of course, to get some "tips & tricks" from the initiators of the social enterprise. 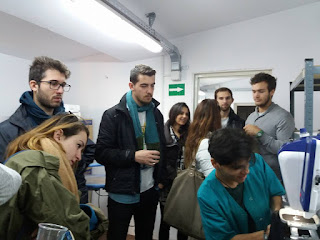 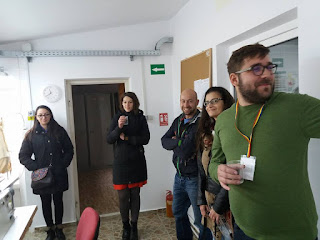 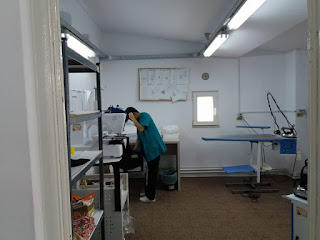 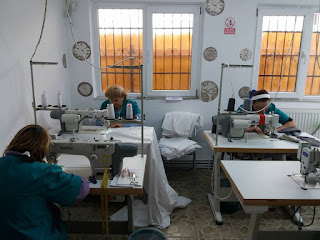 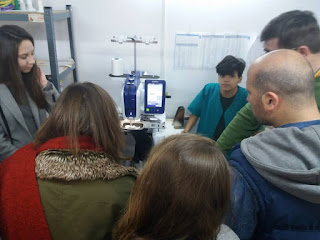 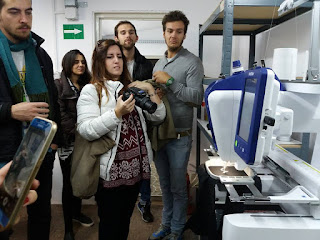 Other projects implemented by our hosting organisation...